The prospect of watershed planning in the Moab area 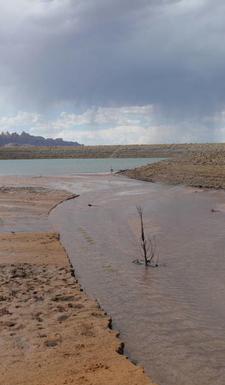 For many of us here on the Colorado Plateau, the dry monsoon season we just had pushed our minds toward thoughts of water security. Even now, as I watch this autumnâs second early snowstorm blanket Moab in white, I think of the small silver pond that Kenâs Lake has become, the many layers of red sand and grey silt now exposed as the reservoir bottomed-out.

Here in the desert, lack of water is an immutable truth; our laws and customs are built around the assumption that there is never as much as everyone wants. The valley of Moab is actually quite unusual in that respect, with a relatively small population blessed with water from perennial streams, as well as artesian springs. The La Sal Mountains float above us, gathering rain to trickle into those streams and percolate into the aquifers.

Moab is not the only exception to the dominant aridity that pervades the Colorado Plateau province, such as our sister communities along the Aquarius Plateau and Grand Mesa, for example, are similarly blessed with the gift of pristine water supplies.

The Colorado River, currently over-appropriated and much too silty for culinary use, curls through the northern end of the valley, a reminder of the tremendous thirst of some 27 million users a thousand miles downstream.

Earlier residents of this place, both natives and pioneers, built an oasis of irrigated agriculture. Their ditches, then and today, use gravity to bring cool, clear water to thirsty crops in the sandy soil. By the turn of the last century, Moab was exporting wagons full of fruit north to the train stops at Floy (Ruby Ranch I-70 exit), Thompson Springs or Cisco.

Now, with Moabâs orchards being torn out for luxury vacation homes and motels (more pillows than residents), Moabâs water is increasingly going towards residential and tourist uses. This may be a fairly permanent change, or it may be a temporary blip before a longer trend towards local food production returns for reasons our society is fast-approaching peak everything.

Either way, many climate scientists report that the Colorado Plateau is likely to receive less usable water than we have in the recorded past due to increased rates of evaporation, dry soils, and a longer growing season.

Regardless of what the future holds, the inhabitants of Moab and Castle Valley need to look comprehensively at where our water comes from, where it goes, and what we must do to ensure that the whole system can thrive through the coming decades and beyond.

The outlook for a coordinated watershed planning effort is still a bit muddled, but getting better all the time. There are several government entities that have overlapping jurisdictions on parts of Moabâs various watersheds, and pulling them together is likely to be a complex (but certainly achievable) task. As a primer, here are some of the processes on the horizon that will have major effects on watershed planning:

Grand Countyâs General Plan update. Grand County, which covers the northern third of the La Sals and much of the mesa watershed below it (as well as Castle Valleyâs watershed), is about to begin the process of updating the General Plan. The Countyâs initial request for proposals from contractors, according to the county planning department, is written in fairly vague terms to encourage creative ideas for revision processes. As soon as a contractor is hired, one of their first tasks will be to hold a series of public âvisioningâ meetings. These will be chances for the public to help the County write a plan that addresses the health of our watershed and water supply. The county will be reviewing contractors in February 2010, and the public input process will begin in March at the earliest. There will be public outreach efforts for all meetings.

San Juan County. San Juan County covers a large portion of southern Spanish Valley, including a lot of SITLA land. There have been several disputes between Grand and San Juan counties, primarily over the provision of water and sewer service. San Juan County officials have declared their intent to maximize real estate development in the valley in order to reap tax benefits. While San Juan representatives would certainly participate in Moabâs watershed planning process, it is not certain whether they would be willing to compromise by passing a Spanish Valley watershed protection ordinance to match Grand Countyâs.

The Utah State Water Quality Dept. and US Environmental Protection Agency (EPA) have a longstanding partnership to help Utah communities produce robust and well-researched watershed plans. The State receives funds from the EPA and other sources, funneling both money and expertise to local entities throughout Utah. There is no legal mandate for this process; itâs based entirely on the ability of a community to put together a solid and politically balanced working group in order to receive funds. No part of southeastern Utah has ever had a comprehensive watershed management plan, and the State has been eager to assist us. This process could mesh well with the County process, and is a very promising avenue. To qualify for the next round of major funding, we must have a basic watershed council put together by the end of the summer of 2010.

The US Forest Service, which governs the La Sals portion of our watersheds, was working on a major overhaul of its general Forest Management Plan until 2005. As it was about to release a formal draft of that plan, the process was held up by a nationwide lawsuit against the Bush Administrationâs handling of the process. A National Forest planner in Price recently told us that the draft plan is ready to release after a few amendments, but that the Forest Service is waiting on the Obama Administration or the Regional Forester in Ogden to give them the go-ahead. Given some thorny legal issues, it seems unlikely that this draft will be released before 2011. This, however, means that the Forest Service planning process could mesh well with a parallel county/state/EPA process.

The Bureau of Land Management (BLM), which is in charge of most of the redrock mesas of our watersheds, has directives in their new Resource Management Plan to complete municipal watershed planning processes. However, the BLM does not currently intend to begin these plans solo, but instead wants to participate as a partner in county/state planning processes. A watershed plan produced as part of such collaboration would likely be formally adopted into the BLMâs internal guidelines.

The State Institutional Trust Lands Agency (SITLA) owns a large portion of the southern end of the Moab valley, as well as a few parcels higher up. SITLAâs legal mandate pushes it to maximize revenue from all its lands, which in the Moab area means real estate development. Whether or not the state must follow county zoning laws is a legal gray area, but the agency has shown some willingness to compromise with counties in the past. SITLA would undoubtedly participate in any collaborative watershed planning process.

There are also several scientific studies of this areaâs water either in process or proposed. For example, the Utah Geological Survey recently completed a major groundwater survey. Congressman Matheson has been pushing for major funding for the Army Corps of Engineers to oversee a âwater budgetâ study for Grand County. And nearby watersheds, such as the Upper Fremont River Basin, have recently completed their own watershed management plans. All such resources would be extremely helpful to our process.

Altogether, there is great potential for the Moab and Castle Valley watersheds to complete, and begin to implement, a watershed protection and restoration plan within the next five years. The quality and efficacy of this plan, however, depends entirely on our communityâs willingness to bring agencies together, gather scientific resources, educate and collect information from the public, and work together. It can certainly be done.

Click here to read about the watershed approach to planning.