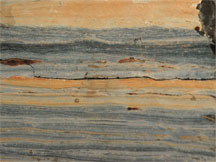 According to the US Geological Survey in April of 2009, there are 1.5 trillion barrels of oil which might be produced from the Green River Formation, which underlies the area where Colorado, Wyoming, and Utah meet.

According to the Senate Republicans Communication Center in 2008, there are 800 billion to 2 trillion barrels of potentially recoverable oil in this formation.

However, there is very little energy profit to be gained from processing oil shale to obtain refinable petroleum for use as fuel. The hydrocarbon in oil shale is in the form of kerogen. Kerogen has about 10 percent of the heat content of petroleum: a lower heat content than municipal garbage and an amount roughly equivalent to that in prunes.

To release the kerogen, the oil shale must be mined and then heated, or the shale heated in situ (in place) to get the kerogen to separate from the silicates in which it is embedded. Oil shale expands when heated, producing a massive solid waste tailings management problem and consequent cost.

If mined, the volume of material which has to be moved, retorted, and then handled as spent waste is enormous. This poses challenges in terms of the energy required to move and process the shale and post-extraction tailings, and the containment of those tailings to protect the environment from them. The tailings are full of water-soluble salts and minerals, which must be isolated from surface and ground waters to prevent contamination.

In order to make a refinable faux petroleum from kerogen, a hydrogen atom must be added to the kerogen hydrocarbon chain.Â  Technologies now in commercial use require consuming an enormous amount of water and energy.

Water use: five barrels of water are consumed for each barrel of oil shale oil produced.Â  The Green River Formation lies in an arid area where existing water is already over-allocated and stream flows are diminishing due to increased aridity from global warming.

Air pollution: The mining and processing of oil shale produces numerous pollutants such as sulfur dioxide, carbon monoxide, ozone and particulates.Â  The power plants required to power production of a million barrels a day would by themselves emit 35,000 tons per year of sulfur dioxide and nitrogen dioxide and more than 105 million tons of carbon dioxide into the atmosphere.

Wildlife habitat: BLM's environmental assessment of the development of million-barrel-a-day oil shale production from the Green River Formation shows probable loss of BLM native fish stream fisheries, loss up to 35 percent of Colorado River cutthroat trout habitat, loss of up to 11 percent of nest and brood range for blue and sage grouse, and adverse effects on elk and deer.

The Bureau of Land Management has a Research, Development, and Demonstration oil shale project ongoing. There are currently six 160-acre research leases in Utah and Colorado, with a second round being offered in late 2009. More than 20 companies responded to the first Request for Proposal.

The stated purpose of the RD&D project is to determine the effects of oil shale leasing and development on water quality and quantity, and its environmental and socio-economic effects.Â  The BLM received 51,685 written comments on its second round of leasing, of which ~25,000 were from members of the Natural Resources Defense Council.Â  Most comments expressed concern about oil shale development impacts on the environment and in particular on water resources in the arid West.

Red Leaf Resources, based in Salt Lake City, claims to have developed a water-efficient "EcoShale In-Capsule" process for extracting kerogen from oil shale.Â  They have purchased an abandoned refinery in Green River, Utah, in order to haul kerogen from oil shale extraction in Uintah County to it for refining into petroleum products.

Ecoshale has a pilot oil shale project on 17,000 acres of Utah School and Institutional Trust (SITLA) land 60 miles southeast of Vernal in Uintah County.Â  The deposit of oil shale there from the surface to 100 feet deep is estimated to contain 1.5 billion barrels of kerogen, of which 500 million barrels is rated as recoverable.

Ecoshale uses bentonite-lined earthen capsules in which the crushed oil shale ore is heated slowly.Â  Ecoshale claims the process uses no water and has low carbon emissions.Â  The pilot plant reportedly produces a product as 39 condensate oil and between 34 and 35 prompt oil with no fines (impurities) in it.Â  Ecoshale claims that ramping their pilot process up to 30,000 barrels per day production would result in a cost of $20.21 per barrel of faux petroleum produced.

EnShale has a patented extraction process which was modeled on the DOE Idaho National Laboratory computer system but not used to commercial scale in the real world.Â  It utilizes horizontal kilns which dry the oil shale ore, then heat it, capturing and cooling kerogen vapors into a condensate.Â  In theory, this process would use minimal water, and deliver faux petroleum at circa $30 a barrel production cost.Â  EnShale says it may take years to develop their method of oil shale kerogen extraction into a commercial production technology.Â  EnShale is a subsidiary of Bullion Monarch Mining, and they have a pilot plant under development on SITLA lands in Uintah County.